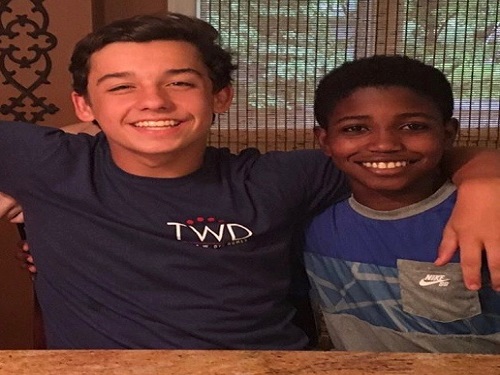 As a tribute to the social media blog "Humans of NY, " the Falcon Press staff decided to create a spin-off entitled, " Humans of CHS. " Staff members will roam the halls weekly until they find a " human" with an inspirational bit of advice, unusual story to tell, or who simply wants to chat about life

“About four years ago, my family adopted a Haitian family.The mom, Albera, 46,  and her son Wlad, 18, have made my life more enjoyable and have expanded my knowledge on culture and family ties. In middle school I played soccer with Wlad. He was a great player and we instantly became good friends. We started off just taking him to school in the morning. Then, he started sleeping over at our house because his mom worked lengthy shifts in order to make ends meet, and sometimes she wouldn’t be home to tuck him into bed or make him food, let alone unlock the door for him.  My family was able to give him that opportunity. We made sure he had clothes, was fed, and had a ride to and from school. At first, I was nervous about them eventually moving in, however, he grew to be my best friend. We stayed up late watching video games, eating, talking, and getting to know each other. Even though he goes to Cape Henry, I still see him everyday along with his mother. Thankfully, they were able to have their own bathroom and room, but most of the time we are in my room. Wlad and Albera have introduced my family and I into different foods and traditions that are special to them including new kinds of foods. He became the brother I never had, and Albera became a second mother to me. In the fall, I’m very excited for the both of us to attend college. He will attend Virginia Commonwealth University ( VCU) , and I am currently undecided. Hopefully, we will see each other during breaks and special occasions. I will never forget my “older brother.”