Climate change on the east coast: real, or just a hoax 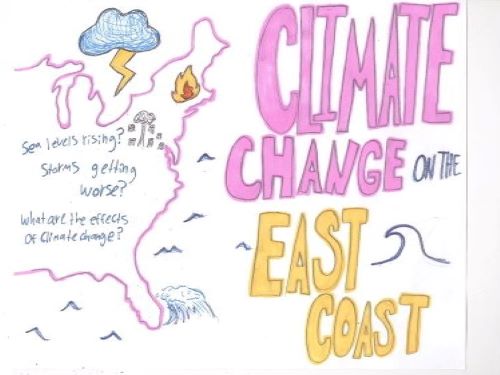 “What’s happening to the planet is not routine,” said Ralph Keeling, a geochemist at the Scripps Institution of Oceanography for ScienceNews.org. “We’re in a planetary crisis.”

For the past few decades, scientists have been sounding the alarm, warning the public about the dangers of climate change. In fact, they have been trying to get the attention of people for decades, in order to convince people that climate change is a real, serious issue.

However, many people don’t even know what climate change exactly is, and they can’t really imagine the impact it will have in the coming decades.

According to the United Nations, the term climate change refers to the long-term shifts in weather patterns and temperatures over the entire Earth. These kinds of shifts have been happening on our planet for millions of years, and are natural occurrences. Scientists have even been able to document certain shifts in the Earth’s climates over the last few hundred thousand years.

So, if it’s natural and happens all the time, why are scientists concerned at all?

Well. mostly because numerous studies have proven that the activities people all over the globe engage in daily have sped the process of climate change exponentially. According to NASA.org, the burning of fossil fuels and other human activities have caused average global temperatures to increase by about 1.8 degrees Fahrenheit.

This increase may not seem like much, but even the smallest increases of average temperatures can seriously harm the Earth and its inhabitants.

Still, it’s a bit more difficult for them to grasp why it’s so important for everyone to try to stop the effects of climate change. For those who still don’t believe that it’s real, soon, they’ll begin to see how it will likely impact their lives in the upcoming decades.

One of the biggest impacts of climate change is rising sea levels, which is  also caused by human activities. For people living on the East Coast of the United States, which is around 118 million people, this could pose a serious issue for them in the coming decades.

According to the EPA, Virginia’s coast could rise from 16 inches to all the way up to four feet in the next century if more efforts aren’t made to stop climate change. This could displace hundreds of people who call Virginia’s coast home, forcing them to move inland into the United States, and causing them to lose their homes.

The rest of the East Coast, of course, is likely to feel these affects too. Millions of people have the potential of being displaced from their homes. If things continue on the trend that they are now, then the makeup of the Eastern United States could change forever.

Yet another thing that the East Coast will have to deal with is extreme weather and storms. Already, the coast has faced some dangerous hurricanes in the past, but now, extreme storms could become a commonplace, even all the way up the Northern part of the coast.

According to the Environmental Defense Fund, the most damaging hurricanes are three times more frequent than they were one hundred years ago, and this can be attributed to climate change. Projections show that as climate change continues to cause the Earth to warm, the amount of dangerous hurricanes that wreck the East Coast will increase.

Extreme storms could damage the infrastructure and economies of the cities and states on the East Coast, as well as displace thousands of people from their homes. If climate change continues to get worse, then these areas could become a wasteland.

These impacts are very real, and so is climate change. In the next century, the upcoming generation of people will be facing terrible consequences if everyone continues to be complacent.

However, there are some out there who are convinced that climate change is not real, and does not pose a threat at all.

According to Grist.org, there are many people who are outright deniers of climate change, and others go against solutions to climate change, arguing that it will put oil companies and their employees out of business.

The extraction and production of fossil fuels is a huge industry. It’s one that employs thousands of people, and the people who own the companies are either millionaires or billionaires. People who do not think climate change is a big deal worry that if the world begins to turn to alternative forms of energy, then there will be an economic collapse, since fossil fuel companies are so large.

They also argue that current warming trends can simply be explained by the natural warming cycle of the Earth. They often believe that people are blowing the issue way out of proportion, and that in the next few decades, things will go back to normal and everything will be fine. They do not believe that alternative forms of energy are the answer.

However, there are numerous studies that prove this belief wrong. According to NASA.org, all signs point to current climate change levels not being natural, and largely caused by people. Unless one is willing to deny science, then to deny the existence of climate change is futile.

Climate change is real, and the impacts of it will only become more clear if people continue to deny it and do nothing to solve the problem. Solutions like alternative forms of energy and cutting down the use of fossil fuels are the best ways to ensure the safety of the planet. Areas like the East Coast, where over one hundred million people live, will only suffer if there is nothing done.