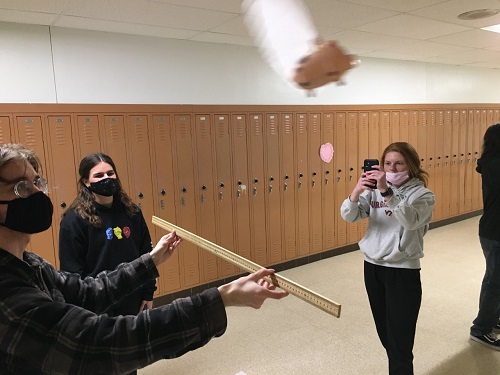 AP PHYSICS STUDENTS junior Cassi Martin and seniors Evi Capetanakis and Evan Spencer use a meter stick to determine the centripetal force of the flying pig. The pig fly's around to give the students live practice at measuring.

Teacher Brian Allard used the Flying Pigs project recently to teach students in his Advanced Placement (AP) Physics class fun ways to learn about traditional circular motion,  as well as the use of Newton’s laws to find the speed, centripetal acceleration, of the pig.

The Flying Pigs lab not only allows Allard’s AP students an opportunity for a hands on learning experience, but to actually investigate the physics of how the pigs fly. Allard decided to use this particular experiment because he believes it is an interesting, interactive way to learn about physics. He found the experiment through a workshop that he did a few years ago. He has personally used this project to teach circular motion for around 10 years.

“This project is a fun way for the students to be active in the curriculum and work together to solve a question,” Allard said.

To begin the lab, a motorized, plastic pig is suspended from a thin string, flying in a circular path with a constant speed. Students use the pig and the supporting string trace a conical pendulum. The goal of the project is to measure the velocity of the pig and figure out two different ways to determine the speed of the pig.

Students’ materials for the experiment included the flying pigs, a timer, and a meter stick. First, the class set up their flying pigs; Isaac and Newton. Both pigs had a mass of 0.15 kilograms. Then, they set the pigs into motion to perform the experiment.

According to junior Cai Luzak, the project was an engaging way to learn about centripetal acceleration.