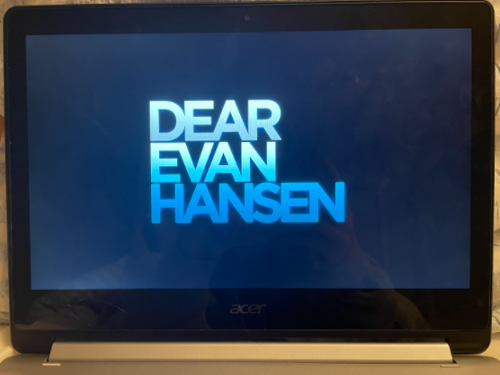 THE MOVIE "DEAR "DEAR EVAN HANSEN" deals with mental issues that affect not only teenagers, but anyone who suffers with mental health. The main character, Evan Hansen, began to lie to those around him, which, due to his own mental issues, made him a happier person but added to the downfall of others.

I recently watched the movie/musical “Dear Evan Hansen”. I had not done any research on the movie before watching it, but it turns out that it is actually a musical. The film is based off the Broadway Musical “Dear Evan Hansen”, by Steven Levenson, Benj Pasek and Justin Paul, as well as the book entitled “Dear Evan Hansen: The Novel” by Benj Pasek, Val Emmich, Steven Levenson, and Justin Paul. I also discovered that several motion picture companies produced this movie including:  Marc Platt Productions, Perfect World Pictures, and Universal Pictures.

Evan Hansen (Ben Platt) is a teen that struggles with some mental health issues, and on top of that, he also struggles to find his place in the world. So, Evan went to see a therapist who told him to write letters to himself as a way to get his thoughts and feelings out. One of these private letters, however, makes it into the hands of Connor Murphy (Colton Ryan), the “school bully”. It turns out though that Connor is a character who is more representative of a hurt soul, rather than a bully. Ultimately and unfortunately, he commits suicide and is found with Evan’s letter in his pocket. The suicide then kickstarts a whirlwind of lies that became difficult for Evan to stop, especially since he has gotten closer to Connor’s sister, Zoe (Kaitlyn Dever), who Evan has had a crush on for a long time.

In my opinion, all of the actors and actresses did a fantastic job acting, but whenever they burst into song it was hard  not to start laughing because, to me, it felt unnatural and kind of forced. Furthermore, I felt like the characters didn’t find meaning through the music, which is so important in a musical where the songs have to carry the movie. The actors themselves weren’t bad singers though. Platt and Devers’ singing did surprise me a little, mostly because I wouldn’t have imagined they were such fantastic singers that they were cast in a musical.

I thought it was sad that, although the characters could sing, the singing somewhat ruined the movie. The story is timely as it talks about mental health problems, which is a major concern for just about everyone right now due to the pandemic and the political divisiveness in the country. The connections most people can make to the movie are awesome, because they mirrored real life. However, personally, I didn’t like the movie. It felt too forced.

The main theme in “Dear Evan Hansen” also mirrored real life because many people can relate to being an outsider, or even feeling like one, and again, so many people are dealing with problems such as mental illnesses. This movie shows that these people are not alone and that is important to respect others, how they feel and to try to understand.

“Dear Evan Hansen” is not a movie recommendation that is necessarily worthy of everyone’s time, but if anyone should watch, it should be someone who deals with mental problems or struggles to find themselves and their place in the world.