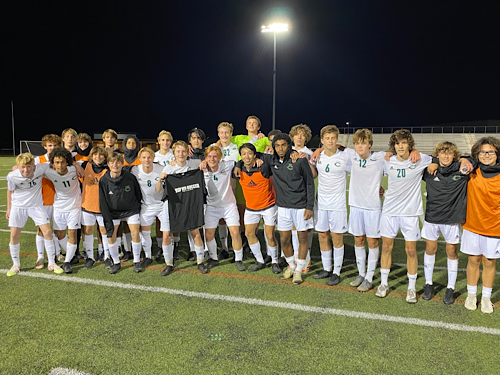 THE BOYS FALCON varsity soccer team celebrate after their big win against the Knights of Kellam High School. The boys are hopeful that they will make it to the state championship at the end of June.

Lead: The Boys’ Falcon soccer team earned themselves another hard fought win against the Knights of Kellam High School (KHS). After a devastating loss, 2-1, the week before against long time rival First Colonial, the team redeemed themselves while showing that they are still a force in which to be reckoned.

What Happened: The boys team traveled to Kellam High School for their fourth match of the season where they to played on Kellam’s turf field; a field in which the ball moves more quickly than on the school’s grass fields. Yet, the Falcons rallied, taking the Knights down on their home field with a score of 3-1.

Key Players: At the beginning of the game, the Knights had a fast and unexpected goal in the first few minutes of play. However, the Falcons equalized this in the 35th minute with a goal by junior Mikey Farmer. In the 53rd minute, the Falcons took the lead with a second goal from freshman Joshua Haggerty on a header from a corner kick. In the 78th minute, junior C.J. Vakos stole the ball from the goalie and put the game to sleep with a third goal.

Who Said It: “It was great to celebrate with the boys after a tough loss to FC last week. Beating another big rival was definitely a huge goal of ours,” senior captain Carsten Bay said.