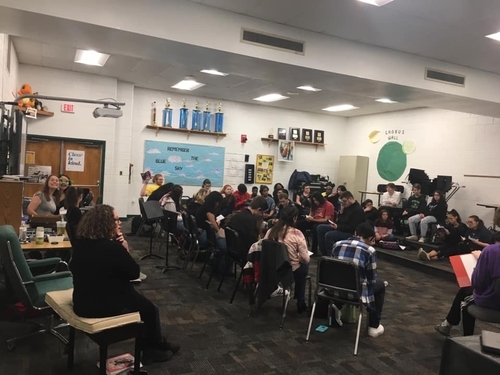 CAST AND CREW of the Falcon Stage Company's spring show "Charlie and the Chocolate Factory" meet to hold their first read through of the script. Student director Jillian Hayes has planned on directing this show since September.

Falcon Stage Company (FSC) held auditions and casting for their third and final show of the year, Charlie and the Chocolate Factory.

Much like the plot of Roald Dahl’s popular novel turned film, Charlie and the Chocolate Factory follows Charlie Bucket, played by freshman Lukas Lewandowski and a small group of “golden ticket” contest winners through a tour of Willy Wonka’s chocolate factory, played by junior Yozelin Rivera.

“I have been planning on directing this show for a while now and I’m really glad that I get to have this opportunity, especially since I’ve been in Guam for the past two years,” Hayes said. “I’m really confident in my abilities, and Jacob’s as well, to direct a fun and appealing show.”

The show will open on Thursday, April 30, and continue through Saturday, May 2. FSC will also hold a special matinee showing on Friday, May 1, to perform for various local elementary school field trips.

“I really want this show to contrast the shows that we’ve done this year that were more on the serious side,” Hobbs said. “I’m looking forward to performing for the elementary school kids because their enthusiasm always fuels the actors to go above and beyond in their performance.”