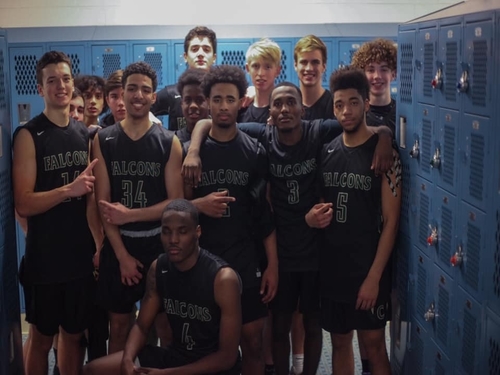 FALCON BOYS BASKETBALL is all-smiles after their win over rival FC. The team has a 11-6 season record.

Falcon Boys’ Basketball gained another win this 2019-2020 season over rival Patriots last Tuesday night at First Colonial. They have a few more games before post-season play.

What happened: The boys’ varsity basketball team traveled to FC last Tuesday to defeat them by 10 points. The Falcons held the lead throughout the entire game with strong team efforts.

Key Players: Seniors Jordan Lewis and Darrien Pratt led the team with scoring, while sophomore Will Bonde played a strong central role. Seniors Tyshaun and Deshaun Creighton contributed to the team’s overall success as well in the guard and forward positions.

Quote: “We played well together, and in the end, it paid off when we defeated FC,” senior Tony Labib said.