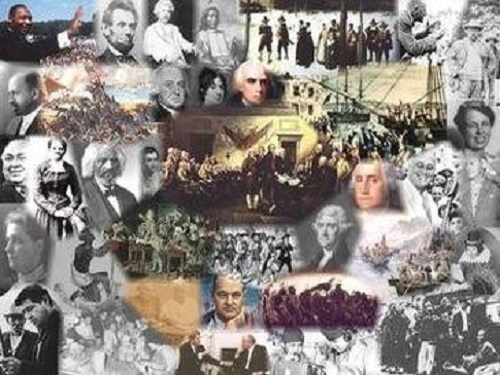 THE MONTH OF January marks not only new beginnings and a chance to start over, but proves to be a notable time of year throughout history. Good or bad, January has seen births, deaths and historical events.

We are now fully enveloped into the first month of the new year, as well as a new decade. But, before we confidently stride into this newest period of human civilization, we also are reminded of people and events in the past and how they’ve affected who we have become as a whole.

Here are some of the most famous or influential developments from the month of January:

*One of the most influential and well-known female figures in history, Joan of Arc, was born on the January 6. She would eventually become a figurehead for the Catholic Church during the Hundred Years’ War and would later be crowned a saint.

*Despite the hundreds of tragedies that humans have stood firm through, one constant plague is that of war and conflict between humans, often ending in vast bloodshed and destruction. However gruesome this side of history may be, we are reassured of its importance in the quote “Those who cannot remember the past are condemned to repeat it,” spoken by philosopher George Santayana. The beginning of the Civil War, which claimed over 620,000 lives of Americans, was the bloodiest war in American history, and tensions between the North and South became even more polarized this month when Florida and Alabama seceded from the Union.

*The infamous German Nazi party was founded on the January 5, which would take over Germany during the 1940’s and commit several atrocities in the name of National Socialism and prejudice, something the world would never forget.

*Showing evidence that the human spirit for invention has never been extinguished, the typewriter, subway, seaplane, steamboat, gasoline, atomic submarine, soda fountain, and dental drill were all invented during the month of January.

*Biochemist and author Isaac Asimov, who would have been 100 years old on January 2. Asimov was responsible for the Three Laws of Robotics and wrote I, Robot which explores the ethical issue of sentient automation.

*Another interesting event that happened this month concerned former Imperial Japanese solider Shoichi Yokoi. During this month in 1972, he finally was discovered on the tiny island nation of Guam, and allegedly didn’t have knowledge that the war with America had ended decades ago, and was still fighting guerrilla warfare as if the war was still going on. He was later caught by locals and returned to Japan.

*While World War II veterans  slowly shrink in number, there still remain a great many veterans from the more recent Vietnam War, which many of our older family members served in. On January 30, 1968, the North Vietnamese forces started a large conflict known as the Tet Offensive, which then made a huge push towards the South. Although it was put down by Americans and the South Vietnamese, it was seen as a sign that the North didn’t intend to end the war anytime soon, using propaganda tactics to sway public opinion of the war in America.

*The Civil Rights movement has long been a major staple in American history as it marks the turning point where America truly became the land of the free through a peaceful revolution inspired by several figureheads at the time.

*Jackie Robinson, the first African-American to play professional baseball, was born on January 31 and cemented his place in history as number 42 on the Los Angeles Dodgers. He was chosen as the National League’s most valuable player in 1949 and was then elected to the Baseball Hall of Fame in 1962.

*The space shuttle Challenger, carrying not only astronauts, but an elementary school teacher (Christa McAuliffe) who was chosen from a sea of thousands of applicants, exploded nearly a minute after take-off on January 28, 1986, killing everyone on board the doomed flight.

Each January marks the beginning of a new year and in this case, a new decade.  And, each January is a time to reflect on the past and look forward to each new chapter in history.