Falcon sports teams make a statement in Region 5A 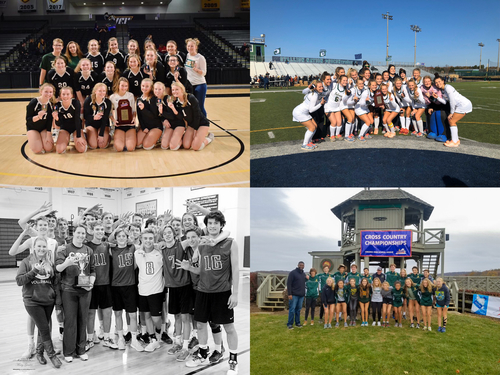 Varsity football finished their season against Salem in the first round of playoffs with a season record of 6-5 on Nov. 15. They had large wins over FC, Tallwood, and Green Run in the regular season play. Senior Nathan Unger was named MVP of the team, junior Dylan Hauser was named Offensive MVP and was an All-District honorable mention for quarterback, junior Isi Tuite won Defensive MVP and was All-District First Team Linebacker by 757teamz.

Cross Country finished the season with going throughout the season as underdogs on both the girls’ and boys’ teams. The girls’ team had a record of 15-3 with a region runner-up title to advance to the state meet. They finished ninth out of the twelve state teams. On the boys’ side, they had a season record of 13-5 and advanced to the state championship meet from a third place regional finish.

Varsity field hockey had a successful season with a record of 20-1. They won the 5A regional against Gloucester to advance to the state championship to successfully defend their state title against Mountain View. The team now holds a record of 21 state titles in the sport. Senior captain Zoe Campisi was named the Region 5A Player of the Year with seniors Sarah Spear and Kylie Levine earning Region 5A First Team Honors.

Girls Volleyball went 22-5 this season and were the 5A region champions after beating FC to advance to the state tournament. Last Friday, the team traveled to VCU to play at the Siegel Center against North Stafford and took the state title in five sets (15-25, 26-24, 25-27, 25-15, 15-11). Key players including junior Michelle Humphrey, sophomore Kenzie Colvin, seniors Maddie Brunick, Payton Brunick, and Kate Wilkins all contributed to the season’s season.

Boys Volleyball capped off their season with a hard fought state semifinal game against Glen Allen at home last Tuesday. The boys captured the 5A region championship win with a season record of 20-3. Senior-captain Tanner Bailey, sophomores Chris Peters and Daniel Hurley, and junior Casey Cool contributed to the season’s overall success.

Falcon Golf finished the season 10-3 with a regional title. The team competed at the state championship on Oct. 28 at the Heritage Oaks Golf Course. Senior Emma Landis placed 13th overall in the 5A state tournament. The first year under coach David Mackey was a step in the right direction for the golf program.