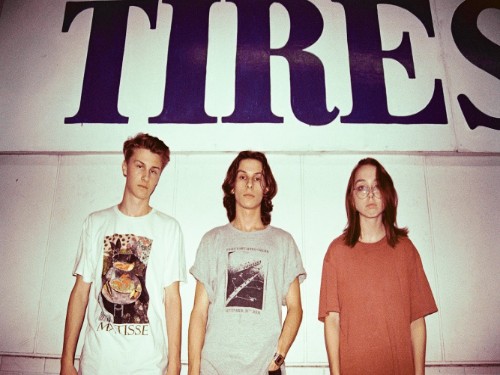 In the sea of amateur bands looking to make it big, ‘Alison Blue’ made its debut last summer. The band itself is comprised of brothers Jack  (12) and Spencer Davidson (11) and Princess Anne High School student Leigh Cress.

J. Davidson seemingly takes the lead on stage, showing off his guitar and vocal skills, while S. Davidson plays bass and Cress jams on the drums. The trio of high school students claim their main genre of music as basically ’90s ‘Shoegazing’, inspired by bands such as ‘Slowdive’, ‘My Bloody Valentine’ and ‘The Cure’.

Q: What inspired you to start making music?

A: “A couple years ago, my brother and I saw a show at The Norva, but all of the bands were in high school. We started following some of these groups around, and we discovered a music scene between Virginia Beach and Norfolk. Seeing people our age not only write music but develop a following, inspired me to pick up the guitar and start making music of my own.”

Q: How did the band form?

A: “I have been writing songs in my bedroom for a while, but starting a band had always been my goal. I remember hunting for a drummer for a while before I met Leigh, so I lucked out finding the best rock drummer our age in the area. I sent her a message on Instagram, and we’ve been working together ever since. By our second practice, we realized we need a bassist, so I asked Spencer to do it. He had never played bass before, but he figured it out extremely quickly. It’s always fun to tell older musicians that I learned guitar from YouTube and put a band together through Instagram.”

Q: What do you want people to know about the band?

A: “I think the most important thing we can tell our audience is what we’re about. We play strictly original material, so if someone comes to our show they know they’re not going to see covers of anyone else’s songs. While I understand the artistry and appeal of cover bands, Virginia Beach is filled with them. If I want people to rock out at our shows, I want them to rock out to our songs. It’s just more honest that way.”

Q: Do you have any big shows coming up?

A: “Yes! We’re super excited about this next one. We’re playing Lava Mini Fest in Norfolk at Toast on Saturday, Nov. 9, which is by far the biggest show we’ve played. Spencer and I have been going to Lava Presents shows for years now, so it’s super cool to finally be apart of a Mini Fest. It’s an outdoor show, which is going to be eleven bands and two stages. If you want to check out the band, this is the way to do it.”