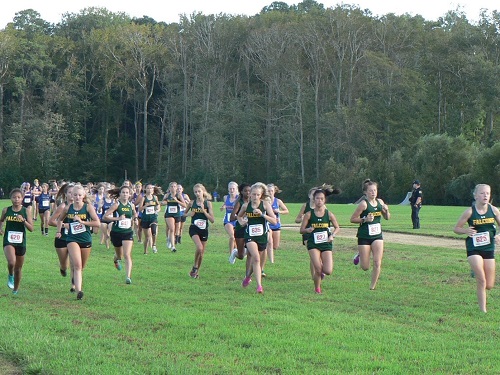 VARSITY GIRLS CROSS country team has an early lead on the field. The team had eight girls finish in the top ten.

The Falcon Cross Country team officially started their regular season at the first Beach District meet last Wednesday. The Falcons pulled away with new personal records and a win for the girls team.

What happened: Cross country competed in their first district meet of the season on September 18th, at Kellam High School. The Falcons competed against Beach District schools Ocean Lakes, Princess Anne, and Tallwood. The girls’ team won their race with the lowest score possible of 15 points.

Key Players: On the girls’ side, sophomore Morgan Cowen won the race in 20 minutes 55 seconds, followed by freshmen Bella Clark, Salya Brown, and Carsen Johnston. On the boys’ side, freshman Owen Comeyne and junior Jacob Wall finished in the top five, both under 19 minutes.

They said it: “My first official meet was good. I was nervous before the run because I wanted to run a personal record. In the end, I was very happy with finishing 2nd with a PR,” Clark said.

Up next: The next meet will be at Kellam High School at 3:30 on Wednesday, September 25.