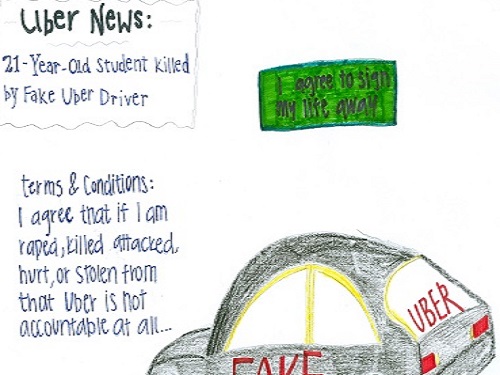 “In the past, Uber conducted background check reruns in jurisdictions where required. Going forward, we’ll proactively rerun criminal and motor vehicle checks each year, regardless of whether there is a legal obligation to do so.” – Dara Khosrowshahi, CEO of Uber

Due to recent events, Uber, Lyft, and other rideshare companies have been under mass scrutiny that has revealed flaws in the companies’ safety, causing concern among passengers. Some of the incidents in question are sexual assault, harassment, and kidnappings which have exposed rideshares for their lack of safety precautions.

The purpose of rideshare companies is for people who utilize the services to get to their destination safely. However, when problems arise, the companies don’t have to take any responsibility for them.

According to benedettolaw.com, since drivers are independent contractors, the company has no liability, and their terms and conditions ensure that. In order to download and use any of the rideshare apps, one must agree to the terms, stating that the company is not at fault for anything that happens – including injury, theft, accidents, physical or sexual attacks, rape, and even death.

It’s easy to assume that there are risks taken when using a rideshare company, but it’s shocking to find out that many companies are well aware of what could go wrong and rather than implement regulations to limit these incidents, they would rather abstract themselves from the liability completely.

On the other hand, these companies provide, in theory, a safe alternative for getting home when someone is unable to drive, or they’re in an unfamiliar place. Instead of being stranded somewhere and in order to reduce the number of drunk drivers, rideshares allow people another option.

While these statistics show a beneficial side to rideshare services, it does not change the fact that these companies have no “control” of, or rather liability surrounding, what happens once someone is inside of a car.

Rideshare programs certainly have potential to create a safe alternative to driving when all variables go according to plan and design, but the programs definitely can pose a major threat to rider safety. With the company’s protection from liability and withdrawal from control over their drivers and rider safety, the services currently can’t be completely trusted.

Again, while rideshare services have the ability to improve business practices and implement more safety precautions for those who actually “need” the services, it will not be possible for anyone, passenger or driver, to be completely safe until they improve their safety contracts and step out of their position of it “not being their fault” and do what they can to respect and protect their loyal customers. And until these companies make necessary improvements to protect all parties involved, they should understand why some parties might choose another plan.