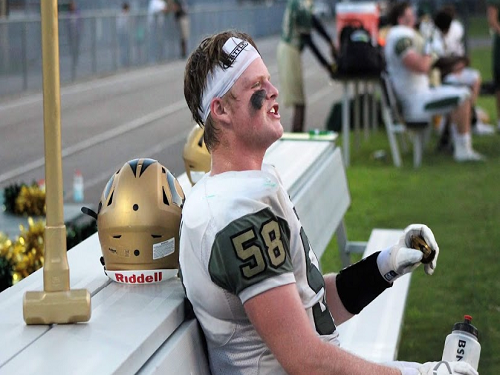 SENIOR FOOTBALL PLAYER Elias Dills rests on the sideline. Dills has played on the varsity football team since sophomore year.

As a tribute to the social media blog "Humans of NY, " the Falcon Press staff decided to create a spin-off entitled, " Humans of CHS. " Staff members will roam the halls weekly until they find a " human" with an inspirational bit of advice, unusual story to tell, or who simply wants to chat about life

“Since kindergarten, I have played the violin. After 6th grade, I became very skilled and have played ever since! I have been in Senior Regional Orchestra for 3 years. Also, I have been named the concert master for  the school and its orchestra performances. Playing the violin is time consuming. On average, I practice about and hour or two a day. My favorite song to play is ‘The Saint Paul’s Suite’ by Gustav Holst. My next course of action is to attend Cooper Union University in New York, or Virginia Tech in Blacksburg in the fall of 2019. I would like to study art and architecture and soon design buildings while making art at the same time, possibly incorporating my art into the buildings. Even though I have to give up social time, it means the world to me to create music. Missing out on those times has allowed me to love music more than I originally did, and meet friends who have the same type of schedule as me. It’s just great to be in a group that you can always turn to and enjoy your time with, doing something everyone loves. Meeting and playing music with different people has broadened my perspective and made me a better person. I have also learned many new things from my instructor and the peers around me. I plan to continue to play the violin as long as I can.”