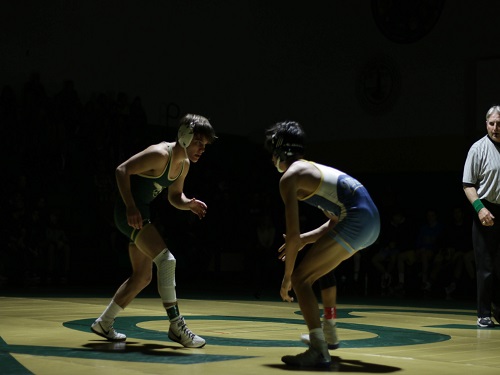 SENIOR WEBB DRESCHER (126lbs.) stands ready to pounce. Drescher was able to score points for the Falcons with his pin. 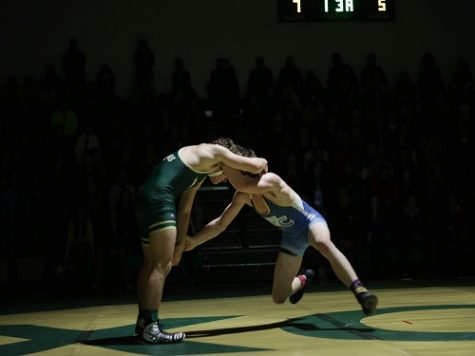 What Happened: The Falcons defeated the Patriots of First Colonial under the spotlight, and on senior night, last Wednesday. Leading the team with most points was senior Webb Drescher, winning by decision in the 126 lb weight class. Senior night was a success as Falcon wrestlers now hold a season record 18-3.

Key Player: Junior Alex “Big Mayo” Blandin pinned his heavy weight opponent in under one minute. Sophomores Branden Agey and Wes Schlemmer made the team’s future look promising, both pinning their opponents in a superior show of strength.

They Said It: “I think we started out rough with F.C. leading in points at the beginning of the night. However, as the weight classes progressed we were able to win more matches and gain mores points,” junior Alex Blandin said.

Key Moment: Sophomore Brandon Agey, wrestling at the 120 lb weight class, scored big points for the Falcons in an early round pin. The win established the winning momentum for the Falcons to overtake the Patriots.

Up Next: The Falcons will face the Ocean Lakes Dolphins, away, on Wednesday, Jan. 23.