Falcons take on the Sun Devils, didn’t quite beat the elements 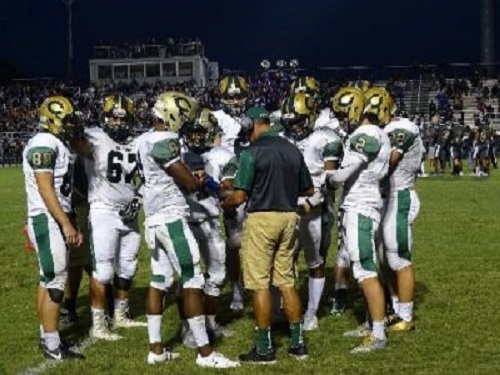 VARSITY FOOTBALL TAKES a timeout during the Salem game. The team huddled in anticipation of the second half.

Falcons football play the Sun Devils of Salem on Friday and there is quite the storm heading our way. This can be taken one of two ways. Salem is a good team and we will also play in the rain.

The Weather Channel predicts that there will be heavy rain and violent winds from Tropical Storm Willa, with low temperatures around 58 degrees. Not the best weather for a tough game.

“We’re going to run the plays we are most comfortable with and hope for the best,” senior O.D. Burkes said.

This grudge match would have a great effect on the Falcon’s post season schedule. A win could increase the chance of a playoff game at the Falcons Stadium.

The Falcons will travel to Salem High School and take on the Sun Devils at 7 p.m. this Friday, October 26.

UPDATE:
The Falcons took a tough loss in the elements last Friday night at Salem, battling constant wind and rain throughout the game.

Perhaps it was the weather that caused the Falcons eight fumbles effecting the outcome of the game. The Falcons held a 16-10 lead entering the half, but began to implode after QB Tayvion Robinson, a Virginia Tech commit, went down in the 3rd quarter.

The game was kept close as backup QB Kendall Spriggins stepped in as his replacement. In the end, the Falcons lost the game 22-24.